...Indeed, Allah will not change the condition of a people until they change what is in themselves... Surah Ar-Rad 13:11 The Holy Quraan

Mentioned below are the various factors of soils and ground conditions that would affect the depth of the foundation.

Generally, the foundation is penetrated down to a minimum depth of 0.5m when considered below the natural ground level. If the ground site is a filled-up type, the penetration must go beyond the depth of fill or other methods given that special precautions are taken. In cases, where we need to have the foundation at a higher level, we determine the difference between the base of the foundation and the level of the excavation, which is filled up by

Below mentioned are recommendations for foundation construction under different ground conditions and soil types.

While constructing the foundation on a ground with slope, the distance from the edge of the footing to the ground surface as shown in figure-1 below is taken as:

As shown in the figure below, a line drawn at an angle of 30 degrees with the footing base must be parallel to the slope of the ground i.e. these lines must not intersect with each other. 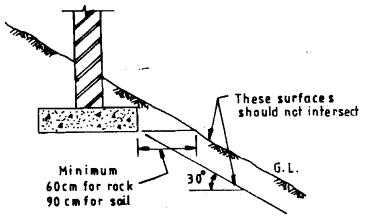 When a new footing has to be constructed near to an old footing, the width of the wider footing (w) is taken. The distance maintained during the construction of new footing with the old one is this width ‘w’. Based on the severity of the project, analysis of the bearing capacities and the settlement can be performed. 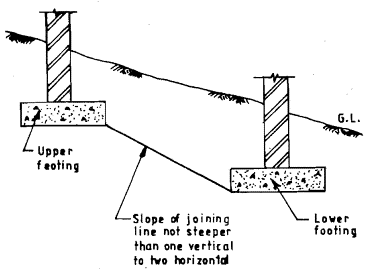 While constructing footing at different levels over clayey soil, the line drawn between the adjacent edges of the footing as shown in figure-3 below must not be steeper than ½ ( One vertical and 2 horizontal). 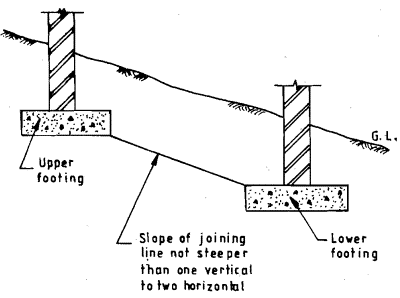 You must be registered user to use this feature.

Melapalayam Progressive Forum is committed to ensuring that your privacy is protected. If we ask you to provide certain information by which you can be identified when using this website, you can be assured that it will only be used in accordance with this privacy statement.

We may collect the following information:

What we do with the information we gather

We require this information for maintaining:

We are committed to ensuring that your information is secure. In order to prevent unauthorised access or disclosure, we have put in place suitable electronic procedures to safeguard and secure the information we collect online.

A cookie is a small file placed on your computer's hard drive. Once the file is placed and the cookie helps analyse web traffic or lets you know when you visit a particular site. Cookies allow web applications to respond to you as an individual. The web application can tailor its operations to your needs, likes and dislikes by gathering and remembering information about your preferences.

We use security token cookies, geographic tracker cookies.. This helps us improve our website in order to tailor it to customer needs. We only use this information for statistical analysis purposes and then the data is removed from the system after its predefined life period.

Links to other websites

Our website may contain links to other websites of interest. However, once you have used these links to leave our site, you should note that we do not have any control over that other website. Therefore, we cannot be responsible for the protection and privacy of any information which you provide whilst visiting such sites and such sites are not governed by this privacy statement. You should exercise caution and look at the privacy statement applicable to the website in question.

You may choose to restrict the collection or use of your personal information in the following ways:

Welcome to our website. If you continue to browse and use this website, you are agreeing to comply with and be bound by the following terms and conditions of use, which together with our Copyright notice, Disclaimer and Privacy policy, govern Melapalayam Progressive Forum's relationship with you in relation to this website. If you disagree with any part of these terms and conditions, please do not use our website. By using, you are bound to this usage of Terms and Conditions.

The term 'Melapalayam Progressive Forum' or 'us' or 'we' refers to the owner of the website whose registered office is 10/83, First floor, Asura East Street, Melapalayam, India, 627005. The term 'you' refers to the user or viewer of our website.

Any redistribution or reproduction of part or all of the content in any form is allowed for personal and non-commercial use only and in general for the benefit and betterment of people, without any bearing on Melapalayam Progressive Forum.

You may copy the content to individual third parties for their personal use, but an appropriate acknowledgement must be given to this site(via backlink) as expressed below.

You may not, except with our express written permission, distribute or commercially exploit the content. Nor may you transmit it or store it in any other website or other form of electronic retrieval system.

The information contained in this website is for general information purposes only. While we endeavour to keep the information up to date and correct, we make no representations or warranties of any kind, express or implied, about the completeness, accuracy, reliability, suitability or availability with respect to the website or the information, services, or related graphics contained on the website for any purpose. Any reliance you place on such information is therefore strictly at your own risk.

Through this website you are able to link to other websites which are not under the control of Melapalayam Progressive Forum. We have no control over the nature, content and availability of those sites. The inclusion of any links does not necessarily imply a recommendation or endorse the views expressed within them.

Every effort is made to keep the website up and running smoothly. However, Melapalayam Progressive Forum takes no responsibility for, and will not be liable for, the website being temporarily unavailable due to technical issues beyond our control.

Views expressed are of the authors of the content, without any bearing on Melapalayam Progressive Forum.